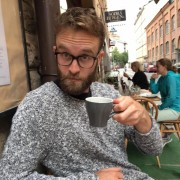 Hal Sundt teaches writing at Columbia University, where he received his MFA in nonfiction writing. His work has appeared in The Rumpus, The Classical, and Away. He is working on a book about failure.

Had I really moved on from my shame? It seemed that time had merely softened the bumps of my past, not erased them. I returned to campus for the 2016 alumni game determined to understand.

It’s the hypotheticals of that moment that haunt me. What if he’d tripped over his legs and blown out his knee, or gone tumbling into the wall and hit his head in a way that triggered bleeding in his brain? At the time, I thought of myself as an activist. Some of my teammates even came to my support—I’d stood up to the coaches. But the self-aggrandizement quickly dissolved into guilt, and six years later it’s more or less remained with me.

When Conroy died, I picked up My Losing Season again. His book made me relive my final college season, which probably explains why it had been nearly seven years since I last read it.